Albariño Tasting of the Rias Baixas

City Winery held a special tasting to highlight the Albariño grape last night. This particular white varietal comes from the Rias Baixas (pronounced Rias Baishas), a lush seafood village along the northwestern coast of Spain. Interestingly, Albariño is produced without wood barrels but with stainless steel tanks, and because these wines are light and not created with complex tannins, they are meant to be drunk young.

The three most common characteristics of Albariño are: distinguished acidity, lush aromatics, and stone/orchard fruits; Each vary in intensity and expression, but the commonalities are undeniable.

Top Chef Harold Dieterle (of Perilla nyc) created an interesting and exceptional menu for the pairing.

Of the 21 different producers of Albariño in this region, WR Tish (our dashing and comical host and coordinator) selected 6 for the tasting: 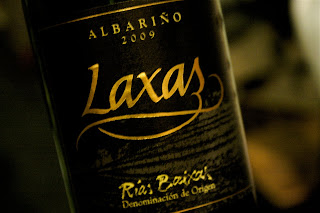 Laxas Albariño 2009
Laxas (pronounced Lashas) began with generous aromas of mild honeysuckle, wildflowers, and ripe pear. I found it a bit creamier (yet more slender) than the other Albariños and possessed a durable acidity that rounded into a supple nature when paired with the dainty Montauk Fluke Tartar with spiced toro chip. The lithe buoyancy of this wine gave it a lighthearted lusciousness, and because it moved so delicately upon my palette I found it to be my favorite sipping wine of the night. 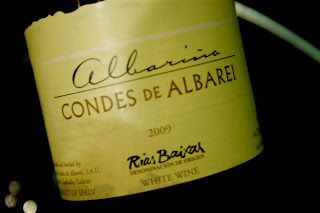 Condes de Albarei Albariño 2009
Albarei had more of a citrus fruit zest locked in its aroma, the acidity was refined yet a bit more fierce, and needed food pairing to tame and soften it up a bit. The chilled curry corn soup with rock shrimp and pickled ramps was creamy and enveloped the acidity with ease. 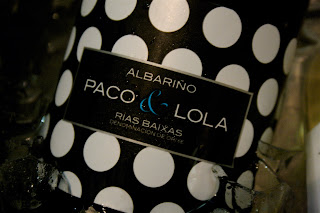 Paco & Lola Albariño 2009
I found this Albariño to be the most aromatic of all, lots of orchard fruits and quite a nectarous nose. Definitely the most full-bodied of the six, Paco & Lola is voluptuous with a concealed acidity. Chef Dieterle chose a very rich dish: Serrano Ham Wrapped Dates with blue cheese. This was a daring pairing; the safest bet when pairing an Albariño is seafood, but here, we enjoyed richness with richness. This Albariño is simply sensuous. 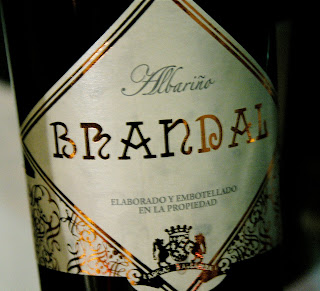 Brandal Albariño 2008
The nose on this wine is Beautiful. I picked up the succulence of melon, particularly honeydew. The overall aroma is simply ambrosial, and brings forth the sentiment of a comforting innocent love. On the palette, its acidity is full of attitude and moxie. The particular dish chosen for the Brandal was Grilled Chicken Satay with a spicy chili jam sauce. The spicy effectively humbled the acidity without assaulting it. I wouldn't drink this alone, it needs a lemon and spice based dish to really bring it home. 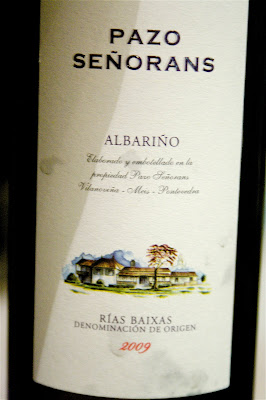 Pazo de Senorans Albariño 2009
Right away I picked up a hint of banana on the nose along with ripe stone fruit and a scent that alluded to a possible creaminess. The acidity readily flaunts its presence at first coating and salivating my tongue, then cozied up a few seconds later. I found it quite pleasing by itself. Upon introducing the Edamame Falafel (with lemon tahini sauce) to my palette, the stone fruit retracted a bit, while the acidity stood its ground without being combative to the flavors. The back and forthness had the likeness of a tango.. on my tongue. 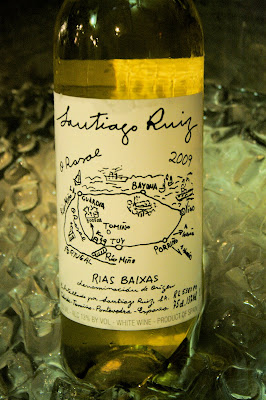 Santiago Ruiz Albariño 2009
The Santiago Ruiz was a blended Albariño (70%Albariño, 15% Loureiro, 10% Treixadura, 5% White Caiño and Godello) I really had to agree with Tish in that this was the most elegant of the six. The nose had a slight spritz of vanilla and honey creme effervescence, while I tasted a subtle Dulce de Leche alongside the soothing acidity. Chilled Calamari Salad atop grilled bread was the chosen match, and I found the chewiness, crisp, and salt to be most enriching aspects for this wine. 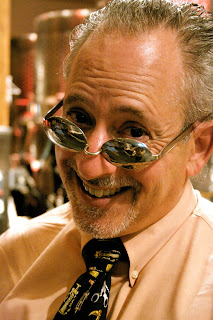 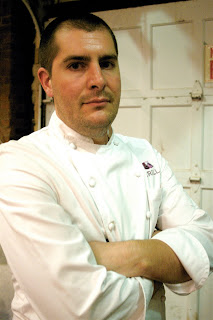 Posted by Raven Moonhawk at 2:53 PM